Royal Australian Air Force staff courses had their genesis with the War College at Mt Martha in Victoria during the latter stages of World War II.   A RAAF Staff College was subsequently formed at RAAF Station Point Cook in 1949, relocating to RAAF Base Fairbairn in 1960.   Annual reunions of Staff College graduates held at the College were well attended until the mid-1980s when attendance dropped to less than 20 despite a graduate body in excess of 1200.   In 1987 the late WGCDR Ted Ilton (Ret’d) with the agreement of the then Commandant GPCAPT Noel Montgomery undertook to explore the viability of an “old boys’ Union” in an attempt to turn around this decline. 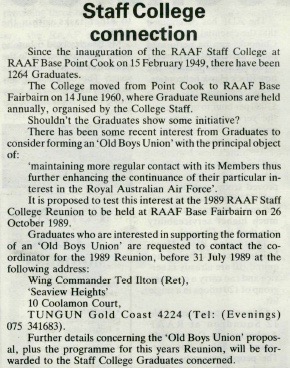 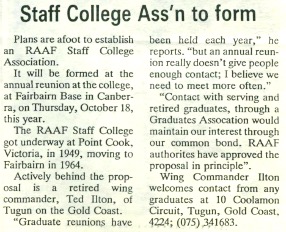 In 1991 the Annual Reunion, attended by 150 graduates, resolved to form the RAAF Staff College Association with the following aims:

Initially the Association held ‘reunion type’ events in conjunction with the annual RAAF History Conference, which attracted quite a large following.   However, since 2003 the Association has focused on holding luncheon seminars in Canberra three times a year to which a guest speaker is invited to address a topical matter of relevance to the RAAF and to the development of air power capability for the ADF.   These seminars, as far as possible, are timed to coincide with such activities as RAAF conferences and RAAF retired officers dinner, likely to attract ‘out posted’ members to Canberra.

While members are now ageing, Association numbers are being steadily bolstered by the influx of graduates from later RAAF Staff College courses, overseas staff colleges and the Australian Command and Staff College and Centre for Defence and Strategic Studies, particularly with the Australian Defence Colleges Association having wound up.   The Association’s Executive Committee remains acutely aware that the Association must remain relevant to the interests of its members and seeks to provide a speaker program, and other activities as appropriate to this imperative.

Doug Hurst’s 2001 history of the RAAF Staff College, ‘Strategy and Red Ink’ traces the history of RAAF Staff College within the context of the main decisions and events influencing the RAAF since World War II.  Beginning with the War Staff Courses, it outlines the main eras that saw RAAF staff training change from a six month, all RAAF affair, into the present course with its diverse student body and strong international flavour.   Widespread use is made of personal recollections, anecdotes and photographs to support the essential facts and figures, and help put things at a personal level for the reader. Most course photographs, along with those of the Commandants, are reproduced in separate appendices.   (Course photographs, with the exception of 32 Course are also posted on the RADS website.)