The Air Force Centenary aircraft family photo – one of each aircraft currently flown by the RAAF, arranged at RAAF Amberley on 17 March 2021

The call, in the Anzac Day edition of DS, for photos from our individual Anzac Day observances, drew welcome comments, photos and even an Anzac Day poem.

‘A very apt and sombre morning with the fog – still misty here on the north side.’

‘All well on the (north) western front.’

From Melbourne, Alan Reed (Course 20, and clearly a man with great literary talent) submitted the following:

‘We had a small Dawn Service in front of our Apartment Block in Port Melbourne.  Our Building Manager is an Army Veteran (Malaysia and Middle East) and suggested that we have a local Dawn Service.  He inspired me to say something, so I wrote the poem attached.  We had about thirty people attend.’

So it’s Anzac Day in Melbourne, a very fancy town
But the year is Twenty Twenty and the city is shut down
It’s the virus don’t you know it, we’re in a changing world
So what has really happened, what has this world unfurled?
It’s a nasty little monster, smaller than the smallest thing
You will never see it bite you but you may feel its bitter sting
If you’re older or with problems, keep your distance from the crowd
Your chances really aren’t so good if, with age you are endowed.

So Anzac Twenty Twenty, is a very different time,
No marches through the city, to our amazing shrine
No footy in the afternoon, to add to Anzac Day
No Collingwood or Essendon, in their marvellous display.

But there’s movement in the city, as the word was passed around
We’ll light a tallow candle and put it on the ground
The light will shine and lift our thoughts, to those who built our nation
Their life they did not give for nought, their life was our salvation.

We’ll attend our own dawn service, that symbol won’t be broken
With medals on and thoughts of mates, it’s really not a token
We will listen to the bugler, as he reaches the last post
And then will come reveille, the tune we like the most
And later we will sit alone, in our quiet room
And share our thoughts, our reverence by courtesy of Zoom.

From wars which ripped our world apart, those Aussie blokes were there
They gave their heart, their life, their all and with them we must share
We praise them with our heartfelt thanks, for things unknown they’ve done
They did their very best, to make our nation 0ne.

To our Aussie mates now fallen, it’s them we now respect
They’re always in our memories, despite such past neglect
So it’s Anzac Day in Melbourne and here we are with friends
We keep our social distance but our respect it never ends
We are here today to thank you, to our heroes gone before
How humble we must feel now and feel forever more
Their lights are shining full and bright, as we gather here today
We remember them forever, that is the Aussie way.

From even further afield, Mike Gahan (Course 43) in Kiribati wrote:

‘Here in Kiribati we held a short service at the ADF Compound commencing at 0430, attended by those resident in Tarawa who had seen active service.  The service was held in the Miss Bee Haven bar which overlooks the wreck of the USAAF aircraft of the same name in Tarawa Lagoon.’

‘Following the service we moved to the Coastwatcher’s memorial in Betio where wreaths were laid as the sun rose from the Pacific.  The first wreath was placed by HE Taneti  Maamau, President of Kiribati. Although the formal ceremony had been cancelled some weeks ago, HE Taneti heard late yesterday that a small wreath laying ceremony would be held and made arrangements to attend.  “I’ve always paid my respects on ANZAC Day and 2020 will not be an exception,” he told me.   I would hazard a guess this was the only ANZAC ceremony world wide where the local Head of State attended.  Of course, just as the ceremony commenced, the heavens opened up.’

‘Following the wreath laying we returned to the ADF compound for a traditional gunfire breakfast and swapping of stories.  During the breakfast we paused to hear the 0600 playing of the last post from the AWM.’

Our dawn service saw us standing on our front balcony, streaming the national dawn service and enjoying an amazing dawn breaking before suitably sombre clouds enveloped the lake.   We then had a brisk walk to Kingston, but no traditional Anzac Day cafe breakfast there for us (or anyone else) this year! 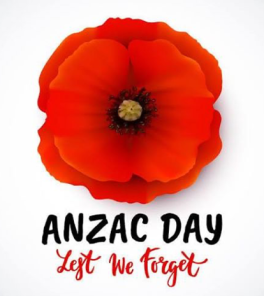 Battle of Britain – making the movie

All RAAFSCA members, particularly course members of No 28 Course (completed December 1974), may be interested in the excellent article contributed to the Summer 2019 edition of Wings magazine by RAF graduate of 28 Course, Ron Lloyd.

There is more to link RAF graduates of RAAF Staff College with the MkIIa Spitfire P7350 (referred to in Ron’s article as ‘P 7’).   When CDF Admiral Alan Beaumont visited RAF Coningsby in June 1994, the station commander was (then) Group Captain Andy Williams, a graduate of 37 Course (completed December 1983).   Escorted by Andy, CDF’s base tour included the Battle of Britain Memorial Flight, in which Admiral Beaumont (perhaps understandably) showed little interest.   Given that he was working to a timeline that included a photo being taken of CDF seated in one of the BBMF aircraft, Andy asked CDF’s (RAAF) staff officer if he would help out by ‘sitting in for CDF’.   Little encouragement was required, especially when the station commander suggested sitting in P7350 since it was the last known flying Spitfire to have fought in the Battle of Britain.   The result is the photo below.   (Yes – what a pretender – but ‘a man’s gotta do what a man’s gotta do’ to help out a RAAF Staff College graduate!)

(Our sincere thanks to Senior Curator, Shane Casey and the team who so expertly guided us through the Mitchell Annex buildings, and to the AWM staff who made the necessary arrangements for our tour.) 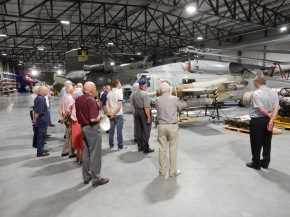 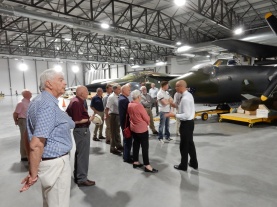 Ian Ashbrook and the group 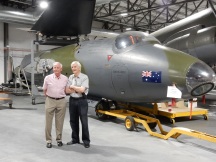 Sabre in spurious markings, and Chinook

Shane with the Bronco wing

Above and below – Russell Offices – mid 1960s (National Library under construction) 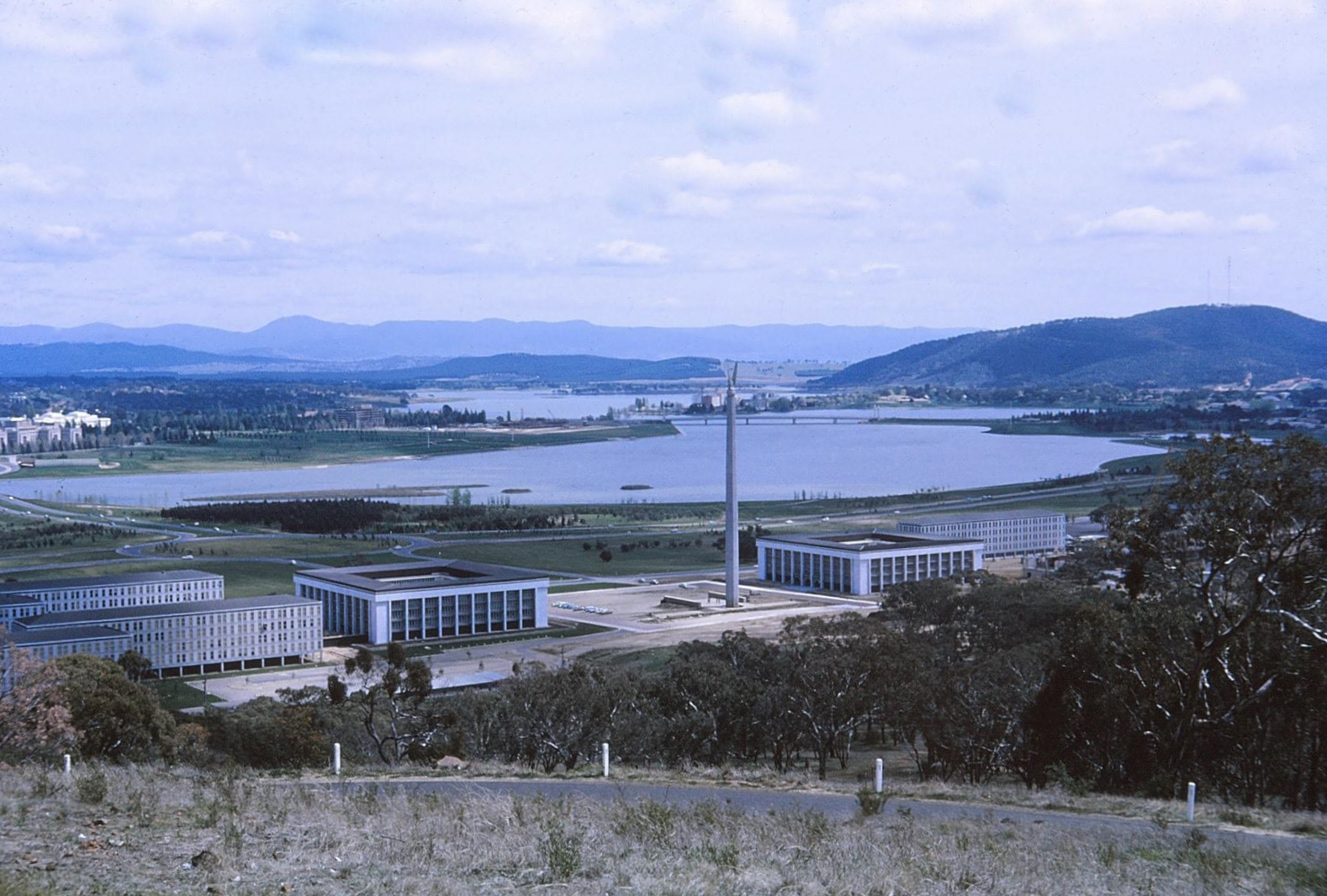 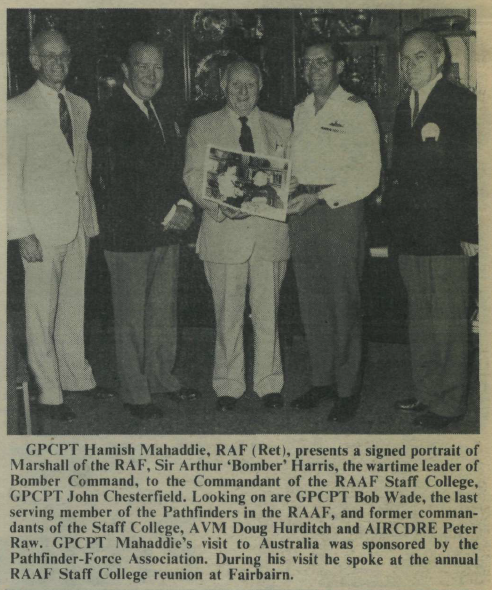 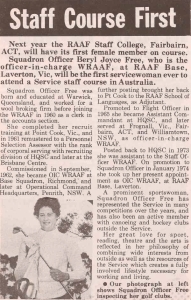